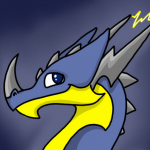 Hello! My name is MooseCreeper. Welcome to my profile!

As you probably already know, I am MooseCreeper- one of the Wiki's resident artists who also has a passion for gaming. On this page, I'll tell you some things about myself.

My main DragonVale park as of June 2017:

Proud member of the House of the Hidden Bolt!

Elder Dragons: all ten of them (one of each)

I'll probably upload some pictures of my park once I finish organizing it. It's just too messy right now.

One of my favorite things to do is to simply sit in a quiet place and draw. If I'm in the mood, I'll occasionally play some calming music on my phone, or sit outside and listen to the little fountain in my backyard.

I also play quite a few video games. They're all mobile/computer based due to the fact that I don't have a TV. My favorite games are Dragonvale, Minecraft, Geometry Dash, and Ori and the Blind Forest. I play a few other games as well, such as Neko Atsume, Plants vs Zombies, and occasionally Pokemon.

Despite the fact that I am often inside playing games or drawing, I like the outdoors. When I'm not gaming or drawing, I'll usually be in my backyard or at the archery range. Even though I have more time to go outside during the summer, winter is my favorite season. I've always liked colder weather. Unfortunately, where I live it hasn't snowed much in the past few years. I also love basically all animals, especially cats. (and dragons too, if you want to count mythical creatures.)

My favorite books and movies are the same. The Lord of the Rings trilogy. I also like Harry Potter and the Chronicles of Narnia. Basically a whole lot of fantasy.

Chocolate. I'm hopeless when it comes to chocolate.

Some things I dislike:

I really dislike school. It seems like it takes up my whole life sometimes. Not to mention final exams- those are the worst.

I don't like malls either. They're just too crowded, and I don't like shopping either. Unfortunately, that's just one of those things that you have do do sometimes, even if you're not a fan of it.

Loud noises, but I do admit that I like fireworks. I just have to remember to bring earplugs on the 4th of July.

Some things I'm neutral about:

The final boss in Ori and the Blind Forest- I personally love it, but my computer can barely handle it, and it's difficult to play when lagging.

The internet. Don't get me wrong, there's a lot of cool things on the internet. However, it can be very irritating at times.

For those who don't know, an OC is an "original character." Some people use their OCs as avatars on the internet or as characters for roleplay. Other people create OCs simply because they like creating characters.

My OC was born while I was sketching. I was just drawing random dragons, and really liked this one design. After a bit of editing and personalizing, I had created my OC. His name is Zappur the Conductive Dragon. He is a triple-element hybrid who lives on his own little island in the middle of a vast ocean. He enjoys surfing on wind currents and watching the waves during storms at sea. Sometimes he'll encounter lost voyagers who were stranded by these storms. He rescues them and takes them back to shore.

1 of 5
Add photo
Retrieved from "https://dragonvale.fandom.com/wiki/User:MooseCreeper?oldid=1593621"
Community content is available under CC-BY-SA unless otherwise noted.