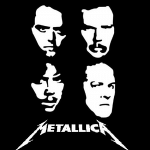 Um, hi. I'm a socially awkward teenager with good taste in music and a loud opinion. Practically, I'm probably the only girl you'd see sitting in English class wearing an Iron Maiden shirt and Vans. I'm not a gamer, partly because I think that's the lamest term for a person who plays video games, but mostly because video games aren't my thing. There are a few I play and love, like DragonVale itself.

Anyway, I like thrash metal, classic heavy metal, punk rock and garage blues. I also like bands that are completely amazing, like Metallica, The White Stripes, Green Day's old stuff, Megadeth and Slayer to name a few.

My favourite dragon is the Liberty Dragon because to me, it represents Metallica's ...And Justice For All album. So I'm naming her Doris when she finishes incubating. My favourite non-limited epic must be the Moon Dragon and limited epic the Celtic Dragon, even though I don't have one. I tried playing Gizmonauts, but I found it boring. So basically DragonVale is my favorite BFS game.

Retrieved from "https://dragonvale.fandom.com/wiki/User:MeliaKing?oldid=1215777"
Community content is available under CC-BY-SA unless otherwise noted.