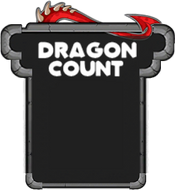 All of the various dragons that are found within the game.

Note: Dragon Count is one more than the Egg Count because Kairos does not have an egg.

The only stage Kairos has is adult.

Note: The only stage Bahamut, Kairos, Tiamat, Gaia and Ts'aishen have is adult.

Important: The Fountain of Youth Button above switches the chart between the adult and baby stages.

Each dragon, except Kairos and the Ovalith Dragon, has its own breeding times and can be bred by placing two dragons in the Breeding Cave/Enchanted Breeding Cave or Epic Breeding Island/Epic Breeding Sanctuary. For specific breeding information, click on the individual dragon's name in the charts above.

Feeding your dragon treats will increase its level to enable a more rapid rate of earning dragoncash or gems. Treats are obtained through Treat Farms, buying them in the Market, or winning them at the Dragon Track.

Dragon levels can also be increased by using gems.

Every time a dragon moves up a level, it grows slightly; significant changes occur at these levels: