Dragons which are part of the "Rift" section of the Dragonarium only have one trait which is unable to be switched.
Example: The Kampos Dragon only has the water trait.

Dragons which have multiple traits unlocked can change to a different unlocked trait for free, but if a player wants to switch to a trait which is still locked that trait must be unlocked first.

The cost to unlock a locked trait is

Each dragon has its own set of possible traits which can be unlocked and unlocked traits are not transferable between dragons.

The only other way to unlock a trait for a specific dragon other than paying to unlock it is to breed the dragon with that specific trait in the Rift Hibernation Cave.

Once a player has one dragon with a trait hatched and present either in the park or rift, any other of that dragon bred in the future with a different trait will automatically be applied to it as an option to switch to in the Transfiguration Tower. 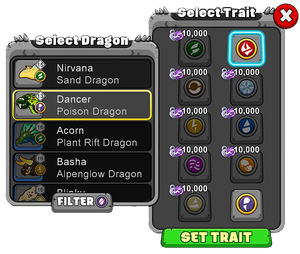 The Transfiguration Tower can be used by selecting a dragon from the list of dragons on the left side of menu after entering it.

Once a dragon is selected the player will see which traits are unlocked and which are locked for it.

If a trait is unlocked it can be selected and confirmed by tapping on the "Set Trait" button at the bottom.

If a trait is locked it must be unlocked first before it can be set.

Retrieved from "https://dragonvale.fandom.com/wiki/Transfiguration_Tower?oldid=1597567"
Community content is available under CC-BY-SA unless otherwise noted.