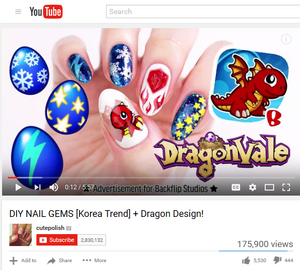 On August 5, 2016, YouTuber team cutepolish uploaded a video to their YouTube Channel.

The video was for an episode showing DIY nail art and was sponsored by DragonVale and Backflip Studios.

In the video Minnie from the channel guided viewers through how to do various DragonVale inspired nail art designs.

The video started out showing the viewer how to make nail gems which is currently a popular trend in Korea.

In the video it was mentioned that they had been playing DragonVale a lot recently the past month and they left a link for their viewers to play DragonVale for free.

During the video Minnie provided a brief overview of what DragonVale is for any viewers unfamiliar with the game.

In the description cutepolish thanked Backflip Studios for sponsoring their video and listed all of the supplies which were used in the nail art tutorial.

Below is the video which cutepolish posted on their YouTube Channel::

1 of 2
Add photo
Retrieved from "https://dragonvale.fandom.com/wiki/Template:DVCollaborations-cutepolish?oldid=1539587"
Community content is available under CC-BY-SA unless otherwise noted.