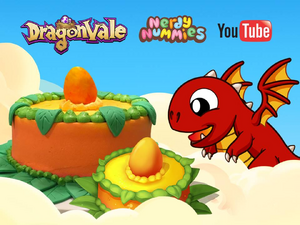 On April 26, 2016, YouTuber and "Kitchen Magician" Rosanna Pansino uploaded a video to her YouTube Channel.

The video was for an episode of "Nerdy Nummies" and was sponsored by DragonVale.

In the video she made a DragonVale Dragon Fruit Cake which appeared in DragonVale the same day her video was uploaded as a limited content treat.

As part of the promotion for the limited Ro's Dragon Fruit Cake, Backflip Studios gave each player who logged in during the promotional time a certain number, based on the park's level. The treats were placed in their Social Menu with the title "Ro & Backflip Studios" listed as the senders.

In the video Rosanna Pansino mentioned that she has been playing DragonVale for almost three years and she left a link for her viewers to play DragonVale for free.

In the video she mentioned how she was inspired by the Dragon Fruit treat and provided a brief overview of what DragonVale is for any viewers unfamiliar with the game.

Below is the video which Rosanna Pansino posted on her YouTube Channel:

Retrieved from "https://dragonvale.fandom.com/wiki/Template:DVCollaborations-Ro%27sDragonFruitCake?oldid=1552834"
Community content is available under CC-BY-SA unless otherwise noted.