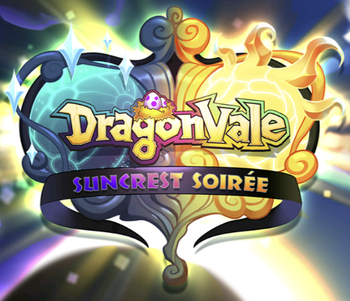 Suncrest Soirée is a special, limited-time event by DragonVale which requires players to collect magic and trade them at the Prize Pavilion to receive rewards.

Magic needed to be collected and traded at the Prize Pavilion. Each reward required a certain amount of magic to be traded in to be earned.

What is the Suncrest Soirée Event?

The Help Menu in Suncrest Soirée provided info on some key aspect of the event.

Suncrest Soirée started with a tutorial explaining how the event will work.

The process of this tutorial can be viewed in the gallery to the right.

When enough magic were collected, they were able to be used at the Prize Pavilion for unique prizes. Players were able to select which reward they wanted in whatever order they wished in four prize tiers: Solar, Lunar, Stellar, and Limited. Each tier contained several prizes.

When there is an orange banner around the "visitors" button, there are Noel dePlante and Hidden Star Dusts around the park.

Noel dePlante would appear once a day and awarded

At the start of the Suncrest Soirée, Deca Games posted a FAQ guide on their Web site.

Retrieved from "https://dragonvale.fandom.com/wiki/Suncrest_Soir%C3%A9e?oldid=1675374"
Community content is available under CC-BY-SA unless otherwise noted.