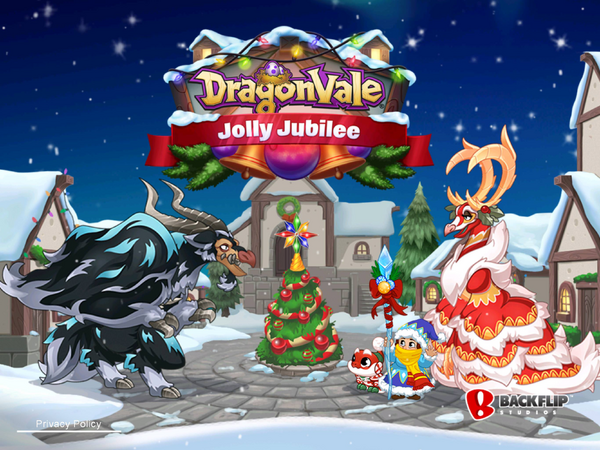 The Jolly Jubilee was a special, limited time event by DragonVale which required players to collect iceberries and trade them at the Mirthful Market to receive prizes.

Iceberries needed to be collected and traded at the Mirthful Market. Each prize required a certain amount of iceberries to be traded in to be earned.

What is the Jolly Jubilee?

The Jolly Jubilee's objective was to collect iceberries for the Witch Lumi.

The Jolly Jubilee helped build on the Jolly Jubilee Island where the Mirthful Market was located which enabled players to obtain them as exclusive rewards for their efforts.

The "Info" section of Prizes section in the Jolly Jubilee Help Menu provided a display of the info box for their respective prizes which were viewed by clicking the prize after obtaining it.

When enough iceberries were collected, they were able to be used at the Mirthful Market for unique prizes. Players were able to select which reward they wanted in what ever order they wished.

At the start of the Jolly Jubilee, Backflip Studios posted a FAQ guide on their Web site .

Below are images of the entire FAQ guide, and the videos in it are in the gallery section of this page:

Retrieved from "https://dragonvale.fandom.com/wiki/Jolly_Jubilee?oldid=1610643"
Community content is available under CC-BY-SA unless otherwise noted.