Every habitat can hold a specific number of dragons, and can accumulate a certain quantity of dragoncash or gems. A habitat that has reached maximum capacity cannot accumulate any more dragoncash or gems until emptied by a player. Upgrades are available for basic habitats, as well as for the sun, moon, rainbow, olympus, seasonal, apocalypse, treasure, snowflake, monolith, aura, chrysalis and the dream habitats, that allow them to hold more dragons and accumulate higher amounts of dragoncash. 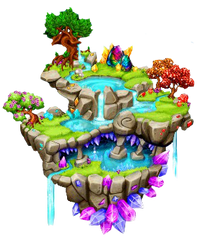 The Galaxy Island is a habitat for all of the galaxy dragons, a special variety of dragon that are bred through cooperative breeding at the Cooperative Breeding Cave.

The Galaxy Island is made to contain one dragon, but can upgraded up to four times to add a dragon capacity each upgrade totaling to five dragons.

Up to four Galaxy Islands can be purchased. The first one is given to the player at no cost, but the second, third, and fourth can be purchased from the islands section of the market for

Each Galaxy Island may be upgraded with dragoncash for the first three upgrades, and with gems for the last upgrade.

Galaxy Island Habitats do not count towards your park limit.

The Perch of Kairos does not count towards your park habitat limit.

Note: Habitat caps do not increase sharply between Level 123 and Level 124, current data is incomplete. Max habitat listings for levels earlier than 124 may no longer be accurate; however, more scrutiny is required.

It is possible to purchase additional, "bonus" habitat capacity with gems. To purchase the additional capacity, tap the green "+" sign under the "Habitats" banner in the market. A message will pop up to confirm.

(*) Based on the highest attainable upgrade

For habitats that can be upgraded, it is also possible to buy a larger habitat, wait until it is finished being built and then sell the smaller habitat after moving any dragons. It costs the same to upgrade a habitat as it does to buy a larger habitat from the market. If the maximum number of habitats are in a park this is not an option. During an upgrade, the dragons in the habitat generate income, but in the Hibernation Cave they do not.