View source
watch 01:47
Why the Eggs in DragonVale Are More Than Just "Pretty"
Do you like this video?
Play Sound
716 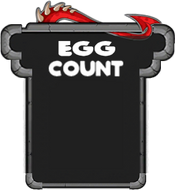 Note: Egg Count is five less than the Dragon Count because Kairos, Gaia, Bahamut, Tiamat, and Ts'aishen do not have eggs.

Note: Sorted breeding and incubation times can be viewed on the Breeding Times page.

Note:Eggs can be displayed on egg pedestals.

Regular breeding times are in the Breeding Cave and Epic Breeding Island.

Upgraded breeding times are in the Enchanted Breeding Cave and Epic Breeding Sanctuary.

The upgraded breeding time can be calculated easily these two ways:

Note: The incubation time is equal to the regular breeding time while the Egg is in the Nursery.